This ice cream is extra tangy, since it’s got two kinds of lemon + goat cheese!

Do you have an ice cream maker in your kitchen?
Do you use it often?
Do you ever use it?
A couple of weeks ago, Cody came home and told me about some ice cream he’d had the day before. It was made with lemon curd and ricotta, and by the time he’d finished describing it, I asked if he wanted me to make something like it. I know, I know…. ask a silly question… hee hee.

So after some time for thinking, I came up with this recipe. I really hope you’ll try it – I think it’s one of my best ice creams so far. Oh that’s right… I haven’t shared any of them with you! Shame on me! I’ll have to start doing that.

On the day I made this, I was kind of winging it, ingredient-wise. I wanted a nice tangy flavor, so I grabbed the lemon curd, a super juicy lemon, and some goat cheese and got to work.

While the ice cream was churning,  I decided to make a blackberry sauce with some beautiful organic blackberries in my fridge. Then I noticed the Olallieberry preserves and thought they would be a nice addition. Which they were 🙂

After the ice cream was done, I poured it into a bowl and let it freeze for 4 hours. This gave the sauce time to chill as well.

As I was dishing out small bowls of my newest invention for the three of us, I realized it needed something, but I wasn’t sure what. I glanced around the kitchen, and my eye caught a glimpse of a little package I’d gotten in last weekend in San Francisco: Ginger Sugar!  Ah HA! I sprinkled on just enough for a hint of spice, and it gave our dessert the perfect sparkle-finish. Yes, that’s a word.  😉 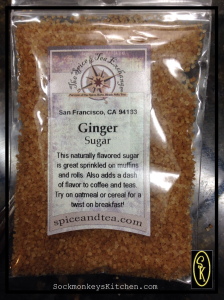 Mix 1 cup milk and all of the cream in large bowl; set aside. Using a stick blender, mix together the goat cheese, the remaining 1 cup of milk, and lemon curd until smooth. Add it to the milk-cream mix. Stir well.  Add lemon rind shavings. Turn on ice cream maker and pour mixture in slowly as it churns. After 2 minutes, add lemon juice in a slow stream. Let the ice cream maker go for 25 minutes, or per manufacturer’s instructions.
Once ice cream is thickened, pour it into a glass bowl that has a tight-fitting lid. Place in freezer.

Sauce:
Using a stick blender, mix together ½ cup Olallieberry preserves, and about 25 fresh organic blackberries. Blend them together until completely incorporated with a stick blender.
Heat black berry mixture (covered with a paper towel) in microwave for two minutes, or just until it begins to bubble. Set a fine mesh sieve over a jar and pour small amounts of the hot berry mixture into the sieve. Push all liquid through, using the back of a spoon. Scrape leftover seeds out of sieve and discard. Repeat until all of the mixture has passed through. Place lid on jar and keep refrigerated.

Serve:
Scoop ice cream into a small bowl, spoon on some of the Ollalie-Black Berry Sauce, add a few fresh blackberries, and sprinkle a tiny bit of ginger sugar over the top.

Bottom line: if you have an ice cream maker and you haven’t used it in a while (or ever!)… NOW is the time!

Dress for your Body Type and Height